It’s amazing to me that one little cigarette could cause so much damage – one little cigarette, improperly extinguished in a wooden planter filled with potting soil. (See “There’s No Place Like Home” for the full story)  But, I should count myself lucky. I only lost my deck. I Googled “potting soil fires” and found an overwhelming number of stories, many about families who lost their entire homes. The Colorado Springs Fire Department reported an excess of 3 million dollars in damage one summer due to potting soil fires.

Potting soil? I was surprised too! The fire investigator who came to my home informed me that he investigates about 50 fires a year that started in potting soil. Many people think that potting soil is just dirt, but it isn’t dirt. It’s actually a mixture of combustible materials and Styrofoam pellets, perlite, and vermiculite, which are added to the soil mixture for aeration and water retention. Some contain fertilizers, which will accelerate the fire (see “Potting Soil Fires and Your Safety”).

But, the potting soil wouldn’t have been an issue had it not been for the cigarette. FEMA listed some startling statistics on their website regarding cigarette-related fires:

I’m extremely lucky to have woken up in time and spotted the flames on my deck. There were two adults (myself included) in my condo that night, 5 children and their parents living downstairs, and another 3 people next door – including 2 of my best friends. Had I not woken up, everyone could have been displaced. Or far worse.

The insurance covered the damages, less the $1,000 deductible, for which I am responsible. The kicker? I didn’t start the fire. I’m not even a smoker. I just so happened to have a house guest who smoked and decided to use my planter full of potting soil as an ashtray. He has refused to pay the $1,000 deductible, even though he is solely responsible for the fire. His excuse? I made him feel bad about it.

My only consolation is that this is a good story – that maybe someone can read this message and learn not to extinguish cigarettes in potting soil. God forbid anyone should have to wake up in the middle of the night and see the home they’ve worked so hard to pay for up in flames. Or worse. The deck, the patio door, and a window can be replaced. Some things can’t. 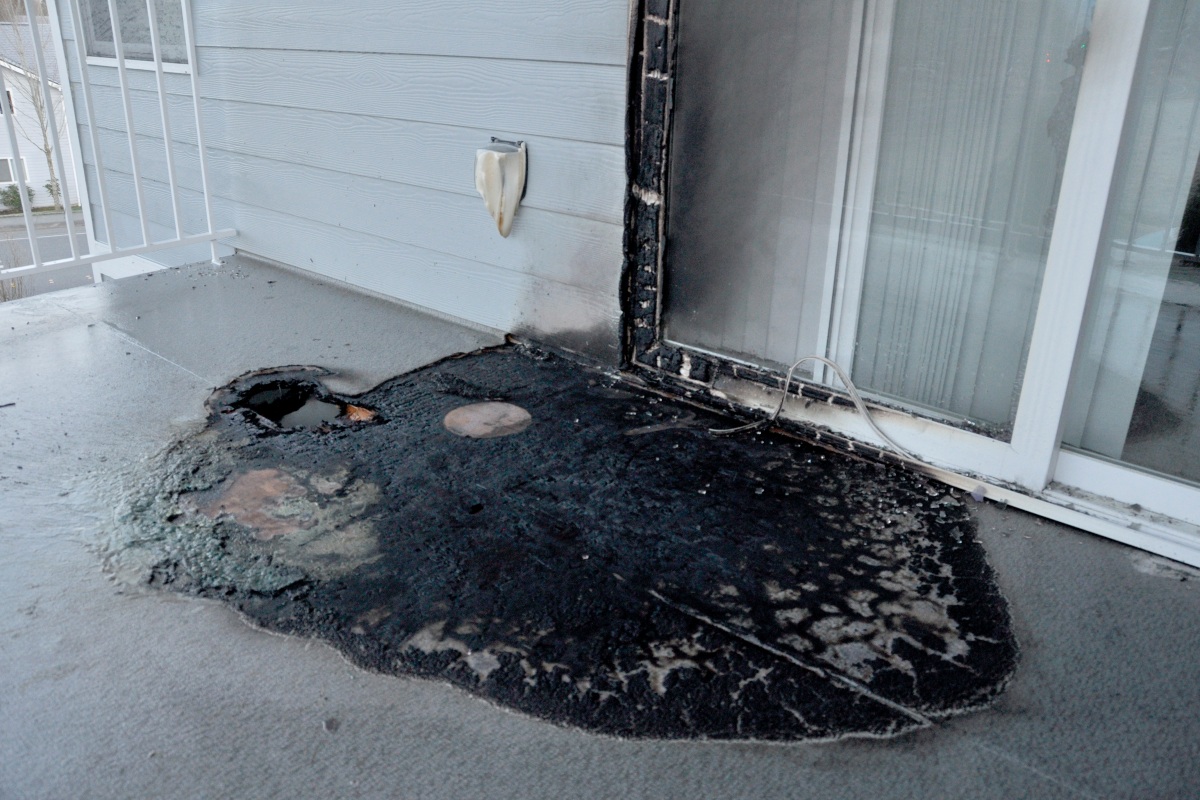 I fall in love with each country I visit. In 2006, I loved Scotland so much that I schemed for months to return as a tour guide for Old Reekie Tours and lead people through the haunted vaults of Edinburgh. In 2007, I became so attached to Tanzania I bought every book about Africa I could find and started the prerequisites for nursing school so that one day I could return and open a mobile clinic for the nomadic Maasai people.

Several years and trips later I ended up in Ireland, and not only did I fall in love with that beautiful country, I fell hard for a handsome cop in County Cork. I flew back to see him for my birthday last March, and the second trip wasn’t nearly as magical as the first – as many of you who have followed the story know. One year ago today I roamed the streets of Dublin, heart-sick and wondering what happened. The end result of all that roaming around upset was that a bartender took a liking to me and decided to fly over here (Seattle, Washington) to see me last week. This did not end well.

I woke up at 5 a.m. this past Saturday, and I heard a rustling sound in my living room – almost as if someone was opening and closing the blinds on my patio door. Figuring that was the bartender jet-lagging around the living room, I decided to ignore it. A few minutes later I heard what sounded like multiple people picking up and moving things around, so I got out of bed to investigate. When I opened my bedroom door, I first noticed the unusual brightness of my living room. The second thing I noticed was the orange flames lapping at the patio door glass.

I ran to my front porch to get a fire extinguisher, fuming with the knowledge that the bartender had started the fire with a cigarette. He’d been smoking on the deck earlier.

Caught up in the moment, I forgot about the little hammer dangling to the left of the glass container holding the extinguisher. Instead, I kung fu’d the shit out of that glass, cutting my hand but quickly getting to the red canister. The bartender appeared as I ran back through the living room so I gave him the extinguisher, and I called 911. I have fantasized for years, ever since I went through fire academy, of putting out a fire with an extinguisher, and it broke my heart to delegate that task, but I needed to get the fire department on the way. The flames shot past the top of the door, and I feared they had extended into the ceiling or roof – and we wouldn’t have been able to extinguish that.

Fortunately, the fire had not extended anywhere outside the deck thanks to my hardiplank siding. However, had I slept even just 10 more minutes, the fire would have eaten its way through the second pane of glass on my patio door, and I would have lost everything. That noise like rustling blinds I heard? That was the first pane of glass breaking apart.

After the fire department left, I looked at the bartender and said, “You’re going to need to find an earlier flight back to Dublin.” He knew what he had done and didn’t fight me on it. In 7 short hours, he was gone.

After all of this, I came to the realization that I love my home.  I love the city in which I live and all of the wonderful people who come with it.   I don’t need to travel to distant places and leave pieces of my heart around the world.  I’ll still visit other countries, but I won’t be leaving my heart anywhere.  I’m content, for now, to remain home and finish up my memoir about Ireland.

Ireland will always be Kieran to me anyway.

I think this will make a great final chapter to the story, don’t you?

I was going to post this shot later in the week, but I found this picture and the hot glowing details so fascinating that I just couldn’t wait.

With no electricity, the stone fireplace centered in the old Shaw Island cabin was the only source of heat this weekend.  A half circle of wooden rocking chairs formed around it, and my friends and I shared stories and Jam Jar wine as the rain fell outside.   Not a bad way to spend a November day in the Pacific Northwest!