I’ve been fascinated with abandoned monastic sites, famine villages, and other ruins ever since I first visited Ireland seven years ago. As their bones slowly crumble into the earth, ancient buildings leave you wondering about what life would have been like anywhere from 50 to 1,500 years ago.

Achill Island has its deserted village, tucked away on the southern slopes of Slievemore Mountain. Skellig Michael has its beehive huts, found ten miles off the coast of County Kerry. And Glendalough has a monastic city, complete with round tower, in the middle of the Wicklow Mountains. Just to name a few. There are literally hundreds of ruins scattered across Ireland. I’ve seen quite a few of them over the years. So, when I landed at Shannon airport last May, I was surprised to find that I’d actually missed a major site!

Mixed in with the various travel brochures that I sometimes peruse for ideas, I found an advertisement for Scattery Island while waiting for my rental car. Located in the Shannon Estuary and less than an hour from the airport, the uninhabited island boasted a monastic settlement, abandoned village and a lighthouse–a trifecta of deserted Irish treasure!

Of course, I called Scattery Island Tours immediately and booked a trip.

Scattery Island Tours is a family run business that started operating in May, ferrying passengers to the island several times a day. The staff is outstanding. From the moment you pick up your ticket and board the ferry until the moment you’re back at the marina, you feel like a welcomed guest. Part of the reason for that is the small group sizes—there were only seven people on my tour, although (I think) they could fit up to twelve on the boat—so you don’t feel like just a number. 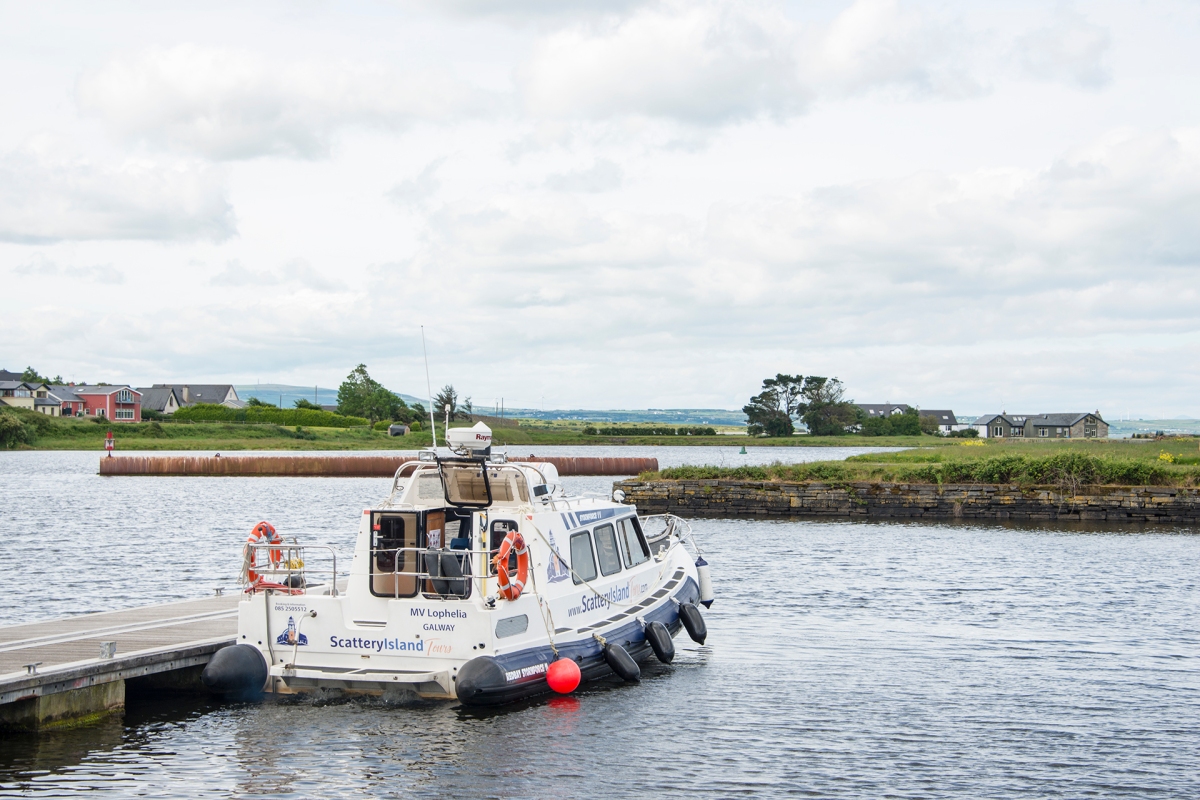 Plus, I love traveling by boat; it feels especially adventurous, like you’re really going somewhere. Leaving Kilrush Marina, the ferry actually passes through a lock. This was a first for me. The tide was out, so it took a few minutes for the water level to fall so we could exit into the estuary. Once out, it only took about ten minutes to get to the island.

Our guide was already waiting for us on shore. He led our humble group of seven down the ecclesiastical path (the easier of two walking trails), regaling us with tales of angels and of venerated saints who drove monsters from the island. Legends were mixed with the history of St. Senan, Vikings, and, most recently, fisher-farmers who occupied the island until about 1970.

After an hour-long tour, we were free to explore at our own pace. A second path led to a lighthouse and artillery battery. A few people walked the twenty minutes or so to get there while I explored the old main street and enjoyed the silence.  I think that was one of my favorite things about the island–how quiet it was. I remember walking behind the village, surrounded by trees and tall grasses, and hearing nothing except the rustling of leaves and a few bees chasing each other down the path. It was just good for the soul.

Don’t let this tour escape you. If you’re in the area, it’s worth adding to your vacation itinerary.

8 thoughts on “Yours to Explore: A Tour of Scattery Island”