Last summer I read an article about a tiny Irish island that would welcome American refugees if Donald Trump is elected President of the United States. It was a joke, of course, probably meant to drum up some tourism.

During every election season stretching as far back as I can remember, Americans threaten to leave the country if their candidate loses. And on the Wednesday morning following every election night, those same people get ready for work and carry on as usual. However, this being an especially contentious election, I thought some voters might finally make good on those threats. Would that tiny Irish island be a good place for American “refugees”? I thought it might be prudent to check it out and report back. (Or, more truthfully, I was just looking for another excuse to return to Ireland…)

Anyway, two weeks after reading the article I was standing on Roonagh Pier, waiting to catch a passenger-only ferry to Inishturk, an island 14 km off the coast of County Mayo. The wind whipped my hair as I listened to stories about a storm that had blown through two days earlier. The ferry operators warned that the waters were still a little choppy, so we should all be careful and hold on. I have never been seasick but worried about the hour-long journey nonetheless.

A dozen passengers and a few crew members boarded the ferry. Some stayed inside the cabin. I chose to stand on deck and keep my eyes on the horizon. The waves were a little rough at first, but by the time we arrived on Inishturk, the waters were much smoother.

And you know what? I’m glad (kind of, not really) Donald Trump ran for President because if not, I’d have never heard of Inishturk! I don’t know that I’d ever live there (it’s very remote), but I’d definitely go back for a week just to disconnect from all the daily noise that can make life so exhausting sometimes.

If you’re planning a trip to Ireland, whether to escape politics or just for fun, there are several great reasons to choose Inishturk island.

Reason 1: Peace and Quiet
Approximately 58 residents live on Inishturk. You could probably meet each one in an afternoon on your 5 km walk around the island. And forget theaters, fancy eateries, and shopping centers. There is a beautiful community center that functions as a restaurant, pub, and library and there are only a few B&B’s from which to choose.  It’s the simple life at its best. Writers, photographers, and artists will love a visit. 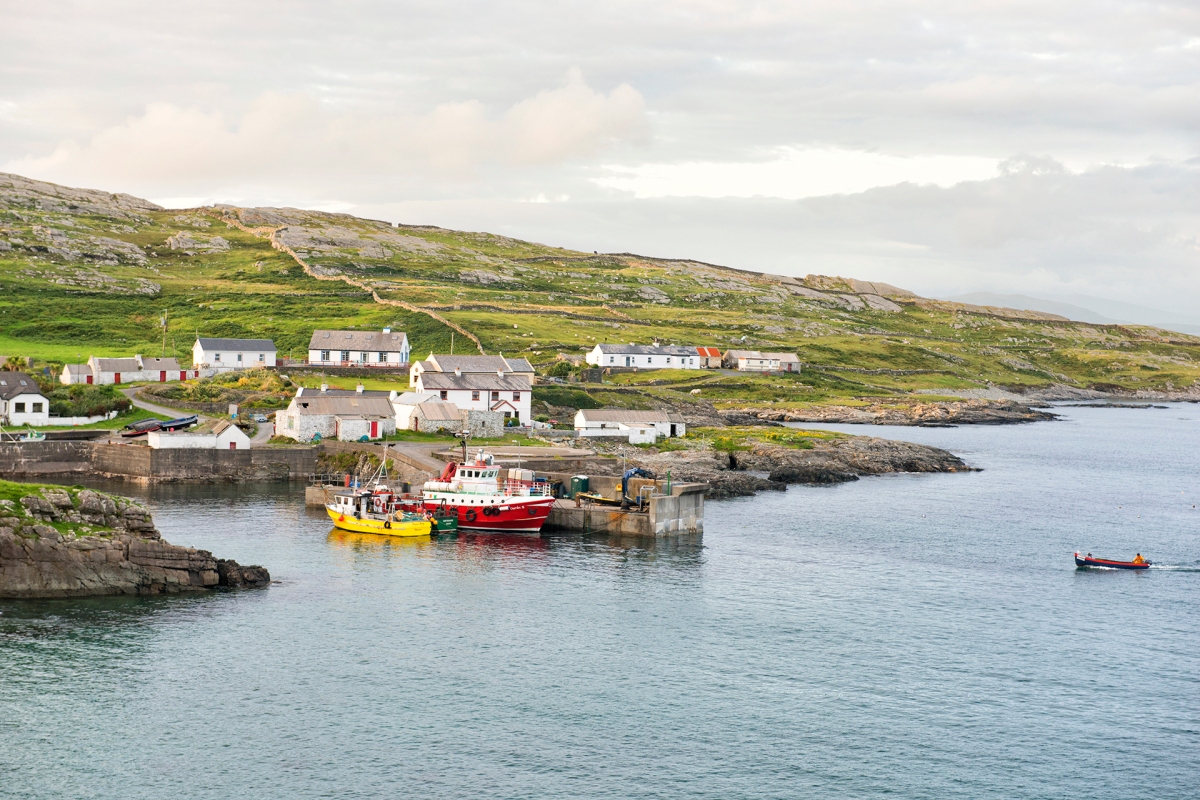 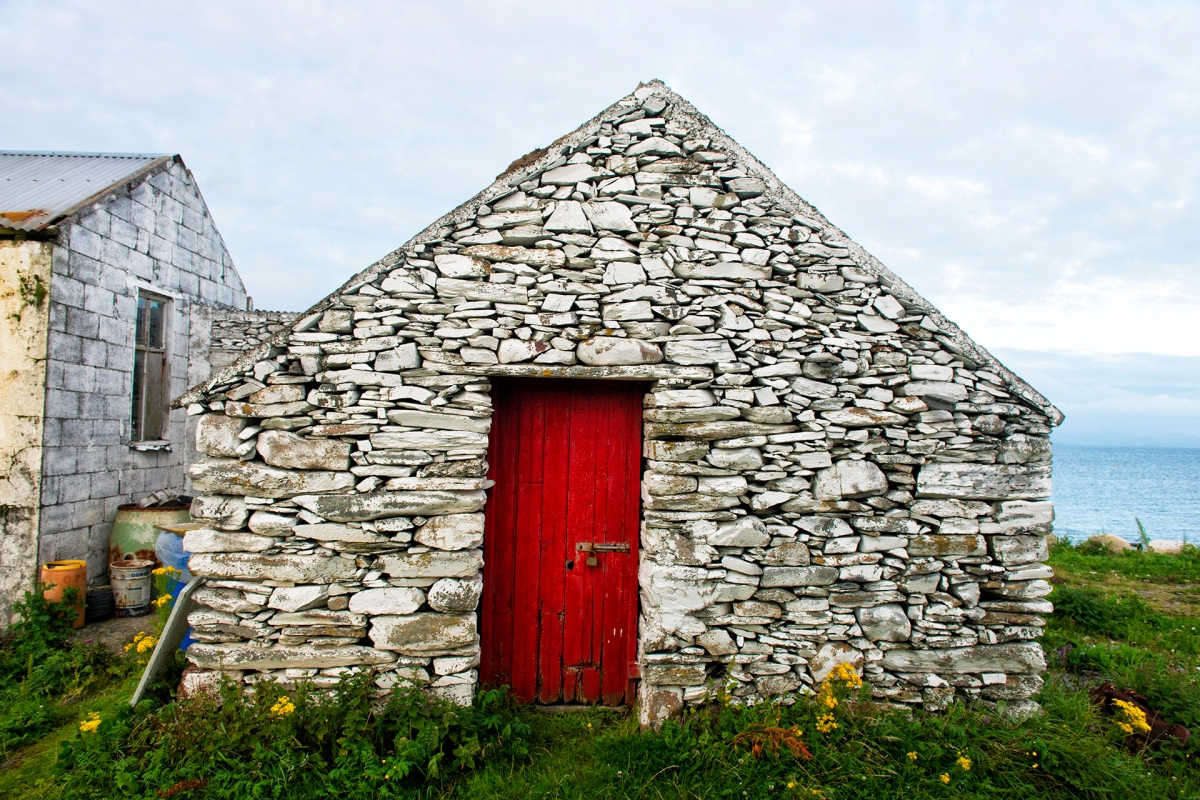 Reason 2: The People
I stayed at Tranaun Beach House, strategically located next to the community center/restaurant/pub. It’s a bit of a hike from the pier, so my host, Phylomena Heaney, drove down to pick me up.

The aroma of freshly baked bread greeted me at the front door of the B&B. Phylomena ushered me into the dining room, serving me tea and scones as I enjoyed a view of the Ireland’s west coast. She was so hospitable and kind – like everyone else I met during my stay. Islanders and other tourists simply wanted to stop and chat, and even though I’d traveled there alone, I never once felt lonely. 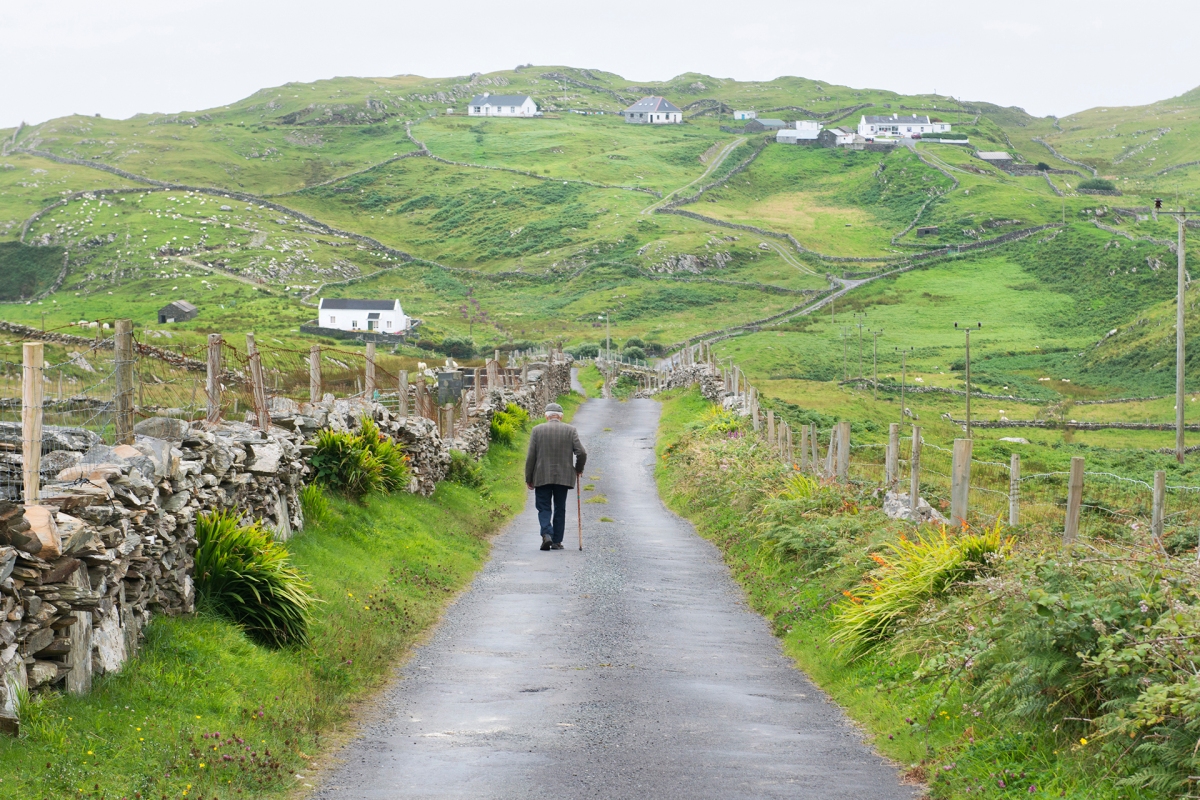 Reason 3: Sheep!
I met Farmer Heaney (Phylomena’s brother-in-law, I believe) on my walk around the island. He’d herded his sheep into a pen because some of them needed a fresh coat of paint. Farmers spray paint sheep with their mark as a means of identification. I’d never seen this done before, so he let me observe and take some pictures.

Reason 4: The Scenery
Fresh air and a decent view. I couldn’t ask for much more… 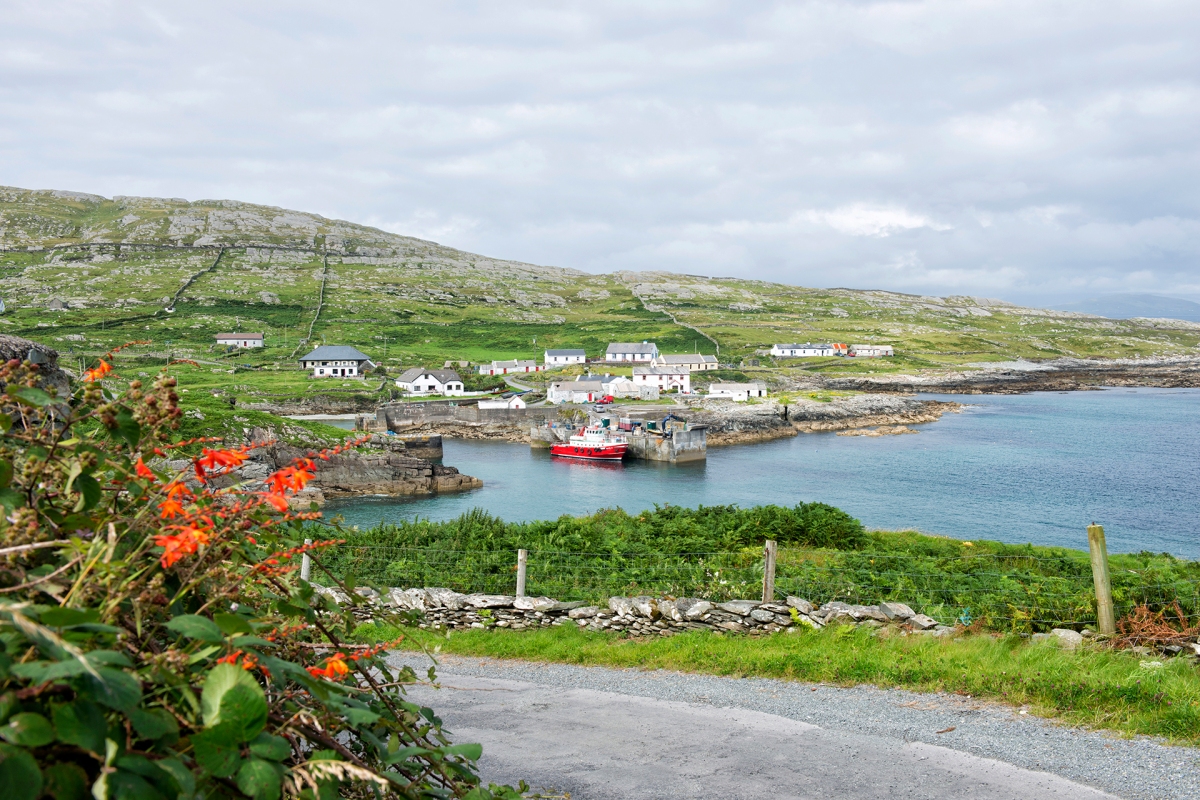 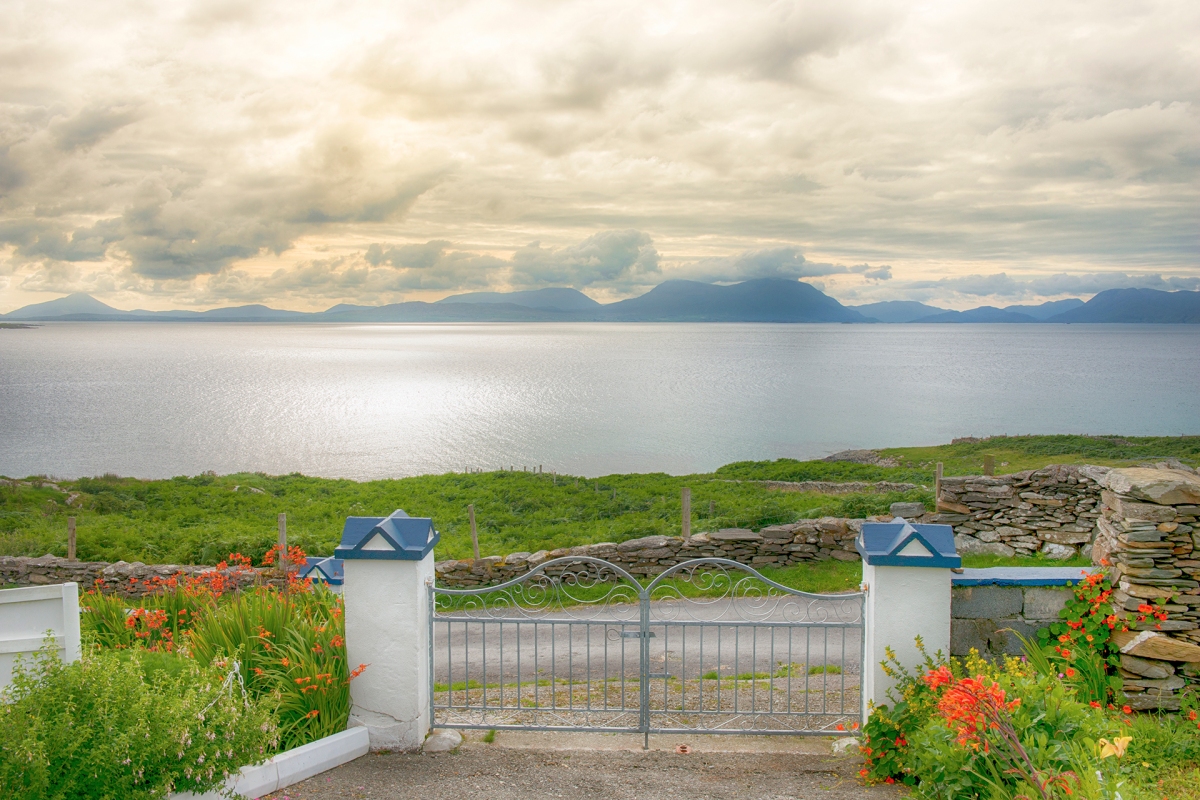 Reason 5: Hiking
As I’ve mentioned, it’s a 5 km walk around the island. The first part is all uphill from the pier, and it’s a great workout after spending so much time in airplanes, rental cars, and ferries to get there.

During my hike, I witnessed the islanders setting up for a festival that would expand their population from 58 to 150 over the weekend. I was tempted to stay on for that, but, as you can imagine, all of the B&B’s were booked and tents filled. 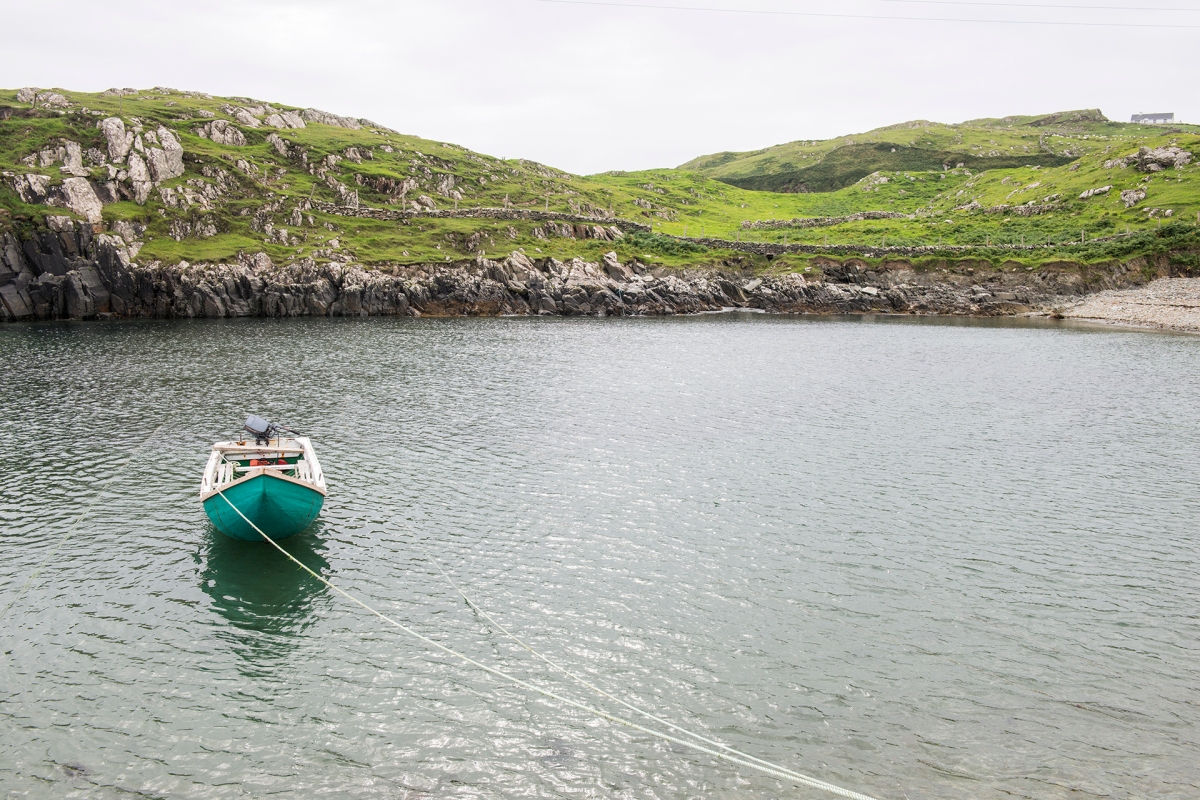 BONUS Reason:  On my way back to the mainland the next morning, several dolphins swam towards the ferry! They stayed alongside us for a few moments before diving below the surface and disappearing. Even the seasoned ferry captain was excited to see them!

Some tips before you go:

Slainte! And don’t forget to vote!!