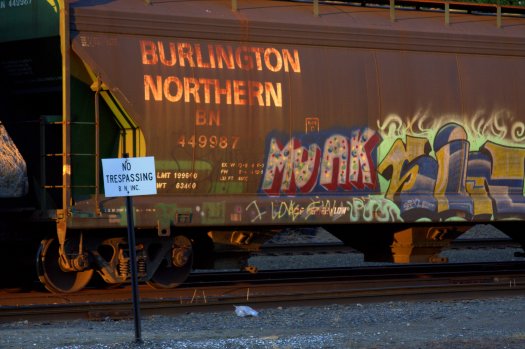 I did lose the lighting more quickly than I expected last night, so my train project didn’t happen.  Instead, I took the path to the marina again and tried to make the most of what remaining light reflected off the clouds.

I happened to spot a Minnesota license plate as I walked down one of the docks.   This resulted in a conversation with two fisherman, who were enjoying a “once in a century” run with a certain type of fish that I can’t now recall.   Keith, the talkative one, bore a strong Viking resemblance:  bushy blonde hair and beard, leathery skin from too much time at sea, with that far away look in his eyes like something distant and dangerous still beckoned him.    Norwegian myself, and convinced there are some Vikings in my bloodline, I understand that feeling.  I understand that draw towards the unknown and the inability to stay rooted without soon growing restless.

I wish the fisherman would have let me photograph them, but these tough guys turned out to be camera-shy.  You can view more photos in my “Ordinary Things” Gallery.