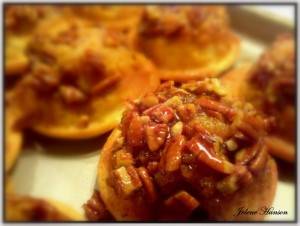 In exchange for the dinner Steven cooked for me last night, I promised to bake him whatever cupcake he picked out from one of my cookbooks. Ofcoure, I already knew he’d pick out the pecan ones because they looked the most Southern.

About 15 minutes into the 25 minute bake time, I smelled something burning. Running into the kitchen, I saw smoke billowing from my stove! Seconds later all three of my smoke alarms were screeching like the annoying (but vital) PASS devices we use at the fire department.

The butter/brown sugar/honey mixture that lined the bottom of each cup had bubbled up the sides of the cakes and had spilled over onto the floor of the stove and burned. However, I’d invested too much time into this project, so I did my best to clean out the black, boiling goo and continue the baking. I put a flat pan below the cupcakes to catch anything new.

How did they taste? Fantastic! I was expecting a burned taste, but they actually turned out perfectly!

Another Tulip Festival throwback. #tulipfields #tulips #tulipfestival #skagitvalley
Intense concentration! #siamese #catsofinstagram #siamesecat #catlife
Last year's tulip festival. #tulips #tulipfields #skagitvalley
This memory popped up today - the time I tried to do a photoshoot with chickens. The chickens weren't very cooperative. #memories #eggs #spring #newbeginnings
Another sunset drive to pass the time.
I would like a cottage in County Kerry, Ireland; Valencia, Spain; and Óbidos, Portugal. Dare to dream, right? #obidosportugal #obidos #travel #travelphotography #Portugal #medieval #wanderlust
I was so touched to get birthday flowers from my friends Chuck and Terri. I haven't gotten flowers in ages, plus they mean even more now being stuck inside. #friends #birthday #flowers
Baby chicks under a heat lamp. #chicks #chickens #spring
My trip to Portugal was fast, just a week, because I wanted a quick getaway and assumed I'd be taking a longer trip somewhere else this year. Had I known what 2020 was going to bring, I would have stayed a longer, relished it a bit more. #travel #Lisbon #wanderlust #lisboa #portugal
It's been easy to find places to walk and hike while still maintaining a safe social distance. I love my state! #washingtonstate #Anacortes #hike #socialdistancing #dontcoroname